A great evening was enjoyed on December 3rd at TRIP & RCHR’s Annual Homecoming Dinner to recognize the achievements of – and thank — two remarkable men.  The Honorable Ron Canestrari, who is retiring from the NYS Assembly, received the TRIP & RCHR 2012 Community Citizenship Award.  His decades of leadership and support of the Capital Region, first as Mayor of Cohoes and then as state assemblymember and Majority Leader, makes him so deserving of this award.  While we will miss him in the Capitol, we wish him a wonderful and well-earned retirement! 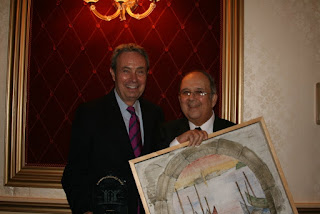 Long-time Troy resident Mike Esposito received TRIP’s “Troy Treasure” award for his many years of volunteering as local historian for Troy and as an active leader of Little Italy’s events and activities.  He also is greatly appreciated for being the most prolific author of TRIP’s “Troy Treasure” columns published in The Recordbi-monthly.  Mike is truly a Troy treasure.
The evening’s Master of Ceremonies was Green Island Mayor Ellen McNulty-Ryan, who demonstrated a comedic ability that kept the audience laughing, even while she gently poked at big brother and former congressman Mike McNulty, who introduced Ron Canestrari.   It was a great evening made special by the two honorees and the many people who came out to recognize them and to support TRIP & RCHR.