Thanks to all who came to TRIP’s Open House at 69 Middleburgh on December 5th.  We were proud to  display our newly rehabbed 3-unit property at 69 Middleburgh Street in Troy.  The building was completely gutted and rebuilt through our partnership with the City of Troy, TAP and FH Alexander General Contractors. 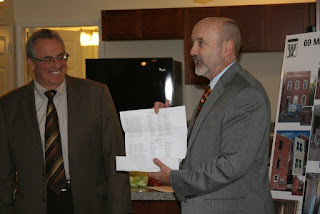 The 19th Century row home was upgraded to the standards of the 21st century and designed to meet the needs of today’s market with larger bedrooms, new kitchens and bathrooms.  The entire property is now energy efficient with high efficient heating and water (on demand) systems.  Additionally, all the appliances and windows are ENERGY STAR products.
Formerly, the property was a source of neighborhood complaints for years.  When funding became available to rehabilitate a building, we approached the owner requesting to purchase it.  We bought it in  September 2011 and renovated the entire building to make it more appealing to today’s market.  Funding was through the federal HOME program which the City administers.  As with all of its rental properties, TRIP will pay property taxes. 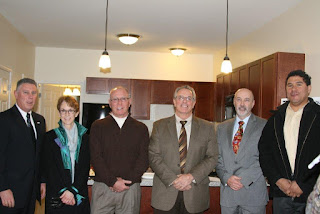 All three units have been rented as of January 1st.   “I never thought I’d be able to afford to get in to a place that was made just for me,” said new tenant Mary Hill, who once lived next door and moved away due to problems at 69 Middleburgh.   The new tenants met standard income eligible requirements and will be paying $624 plus utilities for the one bedroom unit or $732 plus utilities for the two bedroom units.  The energy efficient design will minimize utility costs.
“Our goal is to create areas where people want to stay,” said TRIP Executive Director Patrick Madden.  “We want people to live here because they like it here, not because it’s the only thing they can afford.  That’s the environment we want to create, not only for our tenants but for the block as well.”